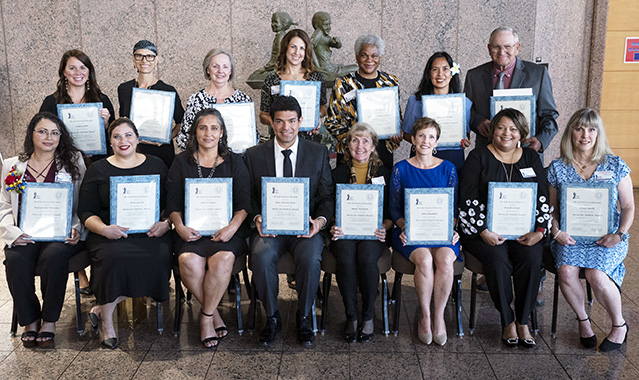 Fifteen school volunteers, who collectively have devoted 179 years of service to the Texas public schools, were honored by the State Board of Education on Sept. 13 as Heroes for Children.

Each volunteer received a plaque recognizing their service, a copy of a board resolution honoring their service, a certificate of recognition from the governor, and photographs commemorating the ceremony. Each hero’s name has also been engraved on a perpetual plaque that is permanently displayed at the Texas Education Agency.

With this year’s group of honorees, the SBOE has now recognized 465 Texans with this award over the past quarter century.

Below is a brief description of the volunteer work performed by each recipient.

Maria Estevane (Laredo Independent School District – SBOE District 1)
Maria Estevane has been a volunteer at D.D. Hachar Elementary School in the Laredo Independent School District (ISD) for 12 years and last school year alone volunteered more than 2,250 hours. She has been recognized as the Laredo ISD parent volunteer with the most service hours for two years in a row. Estevane’s activities include chaperoning field trips, covering cafeteria lunch duty, and decorating bulletin boards. Estevane created crafting opportunities that drew parents to the school and eventually recruited them to became volunteers too. Her school now has more than 150 active volunteers who donated about 23,000 hours of service during the last school year.

Anita Garcia (La Joya ISD – SBOE District 2)
Anita Garcia is a parent leader and a hands-on volunteer in La Joya ISD. She voluntarily teaches a weekly theater arts class at Enrique Camarena Elementary School and also volunteers at Memorial Middle School. She serves on numerous committees at her children’s schools, including the Site-Based Decision Making Committee, the Superintendent’s Parent Roundtable, and the Parent Advisory Committee of which she is the president. She is a vital liaison between the school and families.

Julia Saenz (La Joya ISD – SBOE District 3)
Julia Saenz has been an active volunteer at the elementary, middle, and high school levels in La Joya ISD for the past 18 years. She is currently the president of the district’s School Health Advisory Council. Saenz also is involved with the District Advisory Council, the Language Proficiency Assessment Committee, the District Reading Club, Safe School Advisory Board, and School and Community Safety Task Force. Saenz also finds time to prepare educational material for classroom instruction, special events, and activities for teachers.

Juan Sorto (Houston ISD – SBOE District 4)
When North Forest ISD was consolidated with Houston ISD in 2011, Juan Sorto decided that he wanted to help ease the transition for students at Shadydale Elementary School. He began working with a few English learners in 2012. By last year, he was mentoring 115 students at Shadydale and Hilliard elementary schools. After Hurricane Harvey, Sorto organized a community fair where students and their families could receive housing, medicine, food, and educational assistance. He has also organized Thanksgiving meals and Christmas and end-of-the-year parties for the campuses.

Sheryl Westwick (Eanes ISD – SBOE District 5)
Being a school volunteer is a family tradition for Sheryl Westwick and so is winning the Heroes for Children award. Her parents Alfred and Carol Youens received this SBOE award in 2016 and 2017, respectively, for their long-time service to Galena Park ISD. This is the first time in the 25-year history of this program that three family members have earned the Heroes for Children award. Westwick has volunteered her time in both the Eanes and Austin school districts for 24 years. Westwick had a brain hemorrhage as a teenager and she credits a teacher and her mother with helping her learn to read again. She’s now paying that assistance forward by helping other children learn to read. She also assists in special education classrooms at Eanes’ Cedar Creek Elementary School.

Julie Hinaman (Cypress-Fairbanks ISD – SBOE District 6)
With the beginning of a new school year, Julie Hinaman can be found volunteering as a Bus Buddy, an adult who helps young students get off at the correct stop during those first few days of school. Over her 12 years as a volunteer, she has worked in the school library and mentored at-risk students. Hinaman served as a member and later chair of the Community Leadership Committee. Through that work, she helps educate the Cy-Fair community about ways a strong successful school district will influence industry, property values, and overall community health. Through this committee, Hinaman has advocated for public education before the Texas Legislature.

Brenda George (Brazosport ISD – SBOE 7)
During a six-week period in 2018, Brazoria County experienced 14 attempted suicides among its children and three of those children ultimately died. Brenda George decided it was time for that to stop and she formed Stop, Talk, Overcome, Pain or STOP. Her group formed a collaboration with more than two dozen mental health organizations and hosted large outdoor rallies. STOP began participating in hour-long programs at schools. Through these programs, STOP representatives talk to students about issues such as depression, homelessness, and pregnancy. The program has expanded and now includes teacher training and a peer support group. STOP will host its first college Mental Health Symposium this month at Brazosport College.

Linda Sparks (Conroe ISD – SBOE District 8)
For Linda Sparks, volunteering is a “work of heart.” During more than seven years as a volunteer at Conroe ISD’s Bush Elementary, she has helped with reading groups, math groups, copying, laminating, cutting/pasting, bulletin boards, field trips and the library to name just some of her activities. She’s participated in the Bush Buddy Mentoring Program in which she is paired with one or two children for the school year. She’s become such an integral part of the school that the Bush staff last year presented her with the Friend of Education Award.

Ashley Gibbs (Pleasant Grove ISD – SBOE District 9)
Ashley Gibbs, a graduate of Pleasant Grove ISD, has volunteered more than 1,000 hours of service to her district in the past seven years. She’s organized grandparent breakfasts, coordinated field trips, led Teacher Appreciation Week activities, and served as vice president of development for the Pleasant Grove Education Foundation. The foundation hosts events such as the Hawk Hustle, a field day for elementary school students. Over the past four years, the foundation has raised $130,000 for the district. After a bond issue failed twice, Gibbs became co-chair of a political action committee that successfully and overwhelmingly won voter approval for a $19.9 million bond election in 2018.

Kathi Walrath (Salado ISD – SBOE District 10)
Kathi Walrath began as a room mother in her son’s kindergarten class in Salado ISD, but her volunteer activities quickly expanded. She has since served as the Parent Teacher Organization (PTO) volunteer coordinator for about five years and PTO president for about seven years. Her activities have included organizing school holiday parties, chaperoning field trips, photographing school activities, chairing the Spring Fling, working the concession stands, and organizing numerous fundraisers. Most recently she served on Salado’s Long-Range Facilities Planning Committee, which culminated with the calling of a bond election. She then became treasurer of the Vote Yes for Salado ISD Political Action Committee. She made calls and walked door to door handing out bond information, all while battling breast cancer. Her work paid off with an almost two-to-one victory at the polls.

Roger Grizzard (Weatherford ISD – SBOE District 11)
The late Roger Grizzard served Weatherford ISD for 21 years as a social studies teacher. When he opened The Pizza Place restaurant, his passion for ensuring student success continued. He gave many students jobs at the restaurant. He held election night watch parties and political discussion groups for students at his restaurant. He served on the Weatherford ISD Education Foundation board of directors. Grizzard also sponsored fundraisers, donated food for concession stands, and attended numerous student activities such as athletic events, theater productions and band, choir, and drill team performances. In 2014, he became the first recipient of Weatherford’s True Blue Kangaroo Fan award.

Katie Walsh (Frisco ISD – SBOE District 12)
Katie Walsh has been an active member of the Parent Teacher Association (PTA) at Frisco ISD’s Taylor Elementary School, having served as president, vice president of programs, room parent chair and book fair chair. She organized the school’s Walk-A-Thon for four years and served as the mistress of ceremonies for the event each year. Walsh has organized special events at the school such as “Bring the Dallas Zoo to You,” family reading night, and an event called High Touch High Tech.

Loretta Burns (Fort Worth ISD – SBOE District 13)
Loretta Burns founded the AB Christian Learning Center, which provides academic enrichment programs. As an outgrowth of this work, Burns started the Freedom School in 2014. This is a free six-week program that focuses on summer reading and cultural enrichment for disadvantaged students. Instruction in this program is delivered by trained college interns. Participating students receive a free book each week. Burns is also a member of the executive council for Read Fort Worth, which is a coalition of community and business leaders who partner with Fort Worth ISD as it works towards the goal of having 100 percent of third-grade students reading at or above grade level by 2025.

Edith Natividad (Copperas Cove ISD – SBOE District 14)
As a military spouse, Edith Natividad began volunteering at school to help her children adjust to new schools, but her volunteer work has now continued for three decades. Her volunteerism began by helping struggling third-grade readers in Copperas Cove ISD. She soon served as vice president of the PTA and was involved in various activities such as family nights that focused on different core subjects. She organized and launched a Multicultural Family Night that features a fashion show and food tastings. She also started an after-school hula dance club for kindergarten through second-grade students. The children not only learn basic hula moves but learn to tell their right hand from their left hand while having fun. Additionally, Natividad works with youth who have been selected as city ambassadors and involves them in more than 5,000 hours of service annually.

Roddy “Bud” Allred (Vega ISD – SBOE District 15)
Roddy “Bud” Allred, a retired farmer, has shared his knowledge of mechanical, electrical, and hydraulic procedures with Vega ISD’s Ag Mechanics program and FFA program for more than 15 years. He has taught students welding and fabrication skills and helped high school students on their Senior Project, even when it meant staying at school until 1 a.m. Allred has donated his time and money by transporting the students’ projects to the San Antonio and Houston Ag Mechanics shows. When it has been necessary for the Ag Mechanic teacher to be out for extended periods of time due to family or personal illness, Allred stepped in and helped students plan and work on their projects so that they stayed on track.