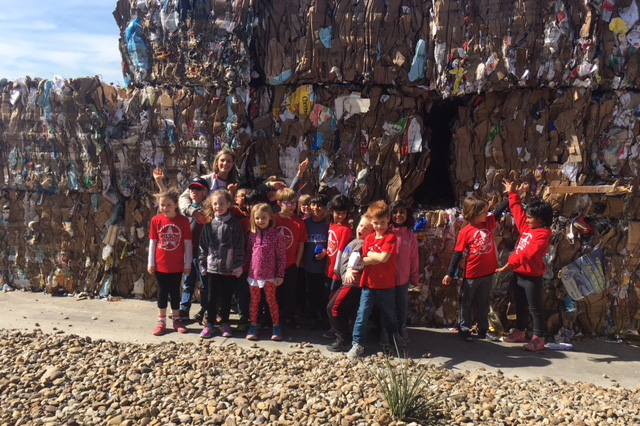 Coppell ISD’s Kelly Clay and her first-grade students at Wilson Elementary School took a field trip to a local landfill and recycling plant and turned it into a campaign to rethink the way their school minimizes waste in the cafeteria.

Before their project began, students and educators who bought lunch in the school café would get a package of utensils with a napkin, fork, spoon and straw. “Nearly everyone would grab one of these packets even if they didn’t need any of the items in them,” Clay said.

After visiting the landfill and recycling plant, Clay’s students were concerned with the amount of waste being buried underground and related this to the amount of unnecessary waste being thrown away in the cafeteria. “They wanted to find a way to minimize the trash we produce during lunch time,” Clay explained. “So, our students interviewed our custodian and asked her about the trash concerns she has when cleaning up after each grade level in the cafeteria. She worked with the learners to help them pinpoint the specific issues associated with the utensil packages.”

But Clay’s students took their efforts further. They researched their ideas, which included purchasing individual utensil dispensers and placing a greater emphasis on recycling in the cafeteria; they spoke with Coppell ISD’s child nutritionist; and they wrote a speech to ask Wilson Elementary’s Parent/Teacher Organization (PTO) to buy two dispenser units at the cost of $100 each.

Both the utensil dispenser units and recycling bins for bottles, cartons and recyclable waste have been installed in the cafeteria, and Clay says the changes were both instantaneous and impactful. “Now, learners and educators alike only grab what they need,” Clay said. “Our learners, from start to finish, they did the research, they did the work, they raised the money, and now we have these dispensers in our cafeteria that will last for years to come. Every little thing makes a big difference, and I feel so proud of the fact that these kiddos are going to care about the earth more than generations before them have.” #IAmTXEd